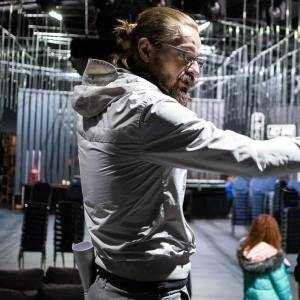 The proverbial Jack-of-all-trades, Vlad Iorga has been working in the entertainment industry for 20 years, starting out as a movie reporter back in the early 2000’s, then moving naturally to working in advertising production, climbing from extras coordinator, 3rd and 2nd AD to 1st AD in the next couple of years.

Things changed in 2008 when he started his own theater company, which led to stage design and big events management, up to working as a stage manager and production manager for local large-scale music festivals. During this time, he never quit his main activity as a 1st AD, working on hundreds of TV commercials for local and international markets.

After quitting the music industry in 2013 he became a freelance executive producer and production coordinator for local advertising production houses up until 2016 when screenwriter and director Bogdan Muresanu asked him to join Mailuki Films romanian partner, Kinotopia, as permanent line producer. Since then he worked on several projects, including the internationally acclaimed “The Christmas Gift”, while also handling the company’s advertising jobs.

He has several advertising Gold Lions and a couple of Effie’s with productions he has coordinated over the years and still operates, in-between films, as a production coordinator for commercial jobs.